‘The music that everyone wants to listen to now is just the trend. I’m interested in transmitting the appeal and value of non-trends’.
byNoa

‘My favorite party in Tokyo is Kato Massacre,’ ‘Have you ever been to Forestlimit in Hatagaya? For me it’s the best place. Go to the party on Wednesdays,’ ‘Kato, Novo Kato, K/A/T/O Massacre.’ I started hearing these things when I had just moved to Tokyo. I was still trying to understand how the underground scene worked here, or simply put, to know where the good party and the most interesting concerts were.

I didn’t even know that ‘Kato’ was a proper name. When I started to see it written as ‘K/A/T/O’ it seemed to me that it could be the combination to open a secret door, a password. The flyers where it was written said that the party had more than two hundred editions. Their design was as hypnotic as it was difficult to read. All these added even more mystery to the matter. Also, the party is called “Massacre”. This had me thinking,  what the HELL could this ‘Kato Massacre’ thing be?

On Instagram I discovered the account that published the flyers. Most of the photos were of second-hand clothes; clothes that reminded me of what the older boys that I liked wore, in the clubs I went to when I was 15 years old (circa early 2000s.) Nothing made sense, I decided that I had to go – period. Even if on Wednesday I had to run from work. There was no other way.

I started to understand some things; I understood why people recommended the local Forestlimit to me. I had never been to a place like that in Tokyo: a damp basement, full of party posters and stickers on the walls, and with a sound system that made you vibrate inside. I understood the shock people experienced at the party: the lineup was so diverse that you jumped from genre to genre without being able to catch your breath. The artists were performing within a foot of you, because the audience was you and a few other people. Cameras and screens of all forms surrounded you to broadcast everything live on Twitch. Wait, no one had asked me at the door for the password ‘Kato’!

I found a clue: ‘Kato-san,’ that is, ‘Mr. Kato.’ Kato was a person. And not just anyone, but the party organizer and owner of the vintage clothing store Novo!. ‘He is a legend,’ they said. I didn’t have any clues about Kato-san as a person. I just knew that he had an incredible eye for finding music and his aura of mystery had me fascinated. One day at one of his parties, I heard whispers that he had just arrived. ‘You are Noa-san, right? You’re always partying!.’ Kato himself was in front of me, and he had recognized me for seeing me on Instagram. He doesn’t know it, but at that moment I started crying inside.

When this happened, I had recently decided to start Chorareii, so the next day I plucked up my courage and asked him for this interview. Kato-san doesn’t usually talk about himself and he doesn’t like taking photos at all, so I didn’t know if he would accept but… he said yes!

Chorareii: You seem like a very mysterious person. I don’t want to break that mystery, but at the same time I’m very curious. Who are you, Kato-san?

Kato: Mysterious? That surprises me!

I thought that there were many lies and deceptions in the world of art, advertising and fashion; I literally felt like I was massacring those things. When I started I think I had a more underground stance than it is now …

At that time there were no customers [in the second-hand clothing store], it looked like a deserted place after a massacre. ‘If you have a party with Kato, will the place look like after a massacre? Still, let’s turn it over with the small number of enthusiastic people that come!’ I thought. Something like that [laughs].

How was the beginning of Massacre as a party?

It all started in early 2014. I heard from Forest Limit owner Napalm Kataoka that he was looking for a new party promoter, as the regular M.O.T.U. party had just finished.

I went to Forest Limit for the first time because I was fascinated by DJ Nozaki, the head of M.O.T.U. At that point, I realized that second-hand clothes could be sold at club parties, and I wanted to create more places like that, so I told Napalm Kataoka that I would like to take up the challenge.

Had you organized other events before Massacre? And do you organize the party by yourself?

Hairdresser and record enthusiast Tatsuhiko Sakamoto came to my second-hand clothing store more than 10 years ago. I organized several parties with him at the Bonobo bar, I think it was around 2011-2013, before Massacre started. The clothes sold well at those parties.

As I don’t have a team, as I am alone, I can work on equal terms with other non-ambitious people. So it is unlikely that I will organize something in the future, organization will one day lead to power. What I hate the most.

How do you manage to find such emerging musical projects all the time? Where are you looking?

If the artists who have cooperated [in Massacre] so far perform, I will go to their parties as much as possible to support them. Whenever I listen to music and get uplifted, I suddenly come up with bold booking ideas. I put them in my smartphone memo right away, I’m crazy about it so I’ll forget it if I don’t write them down!

At the same time, I always keep a close eye on social media. Also, artists and promoters who trust me often introduce me. I will continue to do my best to meet expectations, with original lineups that cannot be achieved anywhere else.

The music that everyone wants to hear now is the trend of this particular moment, but I am interested in conveying the appeal and value of non-trends. I think that intention is reflected in my party lineups.

Different musical, artistic, fashion collectives … have made takeovers of your party. How do you choose them?

The people I meet at the various parties I go to are the ones I trust. They are not only thinking of themselves, they are people who show solidarity with their colleagues and show appreciation to the artists. If these people offer themselves to you, you don’t have to think about it: do your best, like with this interview! Therefore, it is not that I choose them, it happens naturally.

On the contrary, those proposals that seem unreliable … no matter how well known and commercially good they are, I will not accept them.

At Massacre, streaming is an essential part. Do you think the future of live music is (also) on the internet?

Streaming is a great possibility. In fact, it is very positive to feel that you are in solidarity with a viewer who is far away.

Even in a niche music genre, with a small total following, I think that if we connect across the world, we can do more. So even if the coronavirus problem ends in the future, we will continue to search for ways to effectively make use of this distribution in interesting ways.

Have you ever decided to organize a bigger version of Massacre, like a rave or a festival?

If you try to make things big, you can overlook smaller proposals and new talent. There is also the danger of unknowingly falling into ugly commercialism. Rather than make this party bigger, I choose to aim for a society where we can cooperate and coexist with smaller options. I don’t think I need to do big events, other promoters can do it for me.

Do you regularly go to other events in the city?

I think I go to more than 10 local parties every week. I also support the artists who have supported me, I always keep in mind that this is something I can do for them.

Artists should shine their best when they act confidently and calmly. I think that is the work that needs to be brought out, so it is very important for me to show that I am always willing to support the artist. In my opinion this is something very important.

Second-hand fashion is your passion. Which is stronger, music or fashion? And what other things do you like?

Fashion is stronger! I have been obsessed with second-hand fashion for more than 20 years. It’s a lifetime’s work.

Massacre usually takes place in Forestlimit. You have talked about how the party started but, how has the relationship between Massacre and this place been during these years?

Massacre combines many radical proposals that would likely be rejected by the more generic venues. Sometimes they are technically very complicated in terms of acoustics.

I believe that Napalm Kataoka from Forestlimit is an indispensable figure, he knows how to read my intentions and respond to them with passion and with the most attractive acoustic technology.

Regarding execution, he built the technical system based on mutual ideas. For Massacre it is very important to value both quality and experimentation, just like he does.

You also seem to have a good relationship with the music magazine Avyss. Is that so?

Of course! CVN, who runs the magazine, is an artist who has cooperated [on the scene] for many years and I have met him on various live sites. The music he deals with in Avyss is always original and respectable, but more importantly, his attitude is credible.

I am very skeptical of advertising and the media, but I am totally different with anyone who shows a credible and open attitude to cooperate. Avyss is a project of this sort.

The design of your party flyers and videos is always incredible, but I don’t know who designed them.

The designs are from Daisuke Ukisita, who is also a founding member of Forestlimit. He prepares several versions of the Massacre flyer at the beginning of each year, to use them during that year. Every year is wonderful, I’m always excited to see what kind of design arrives on New Year’s Eve!

He works for a variety of clients, all very interesting, so don’t miss out on his work!

What is the future of Massacre? Have you set any edition limits, for example stopping at 500 parties, something like that?

The truth is that I have not thought of anything [laughs].

Do you have any other project in mind that you can tell us about?

I think it would be interesting to have a distribution project with some foreign artist who might be interested in reading this. If anyone has any ideas, please tweet @novo_vintage! 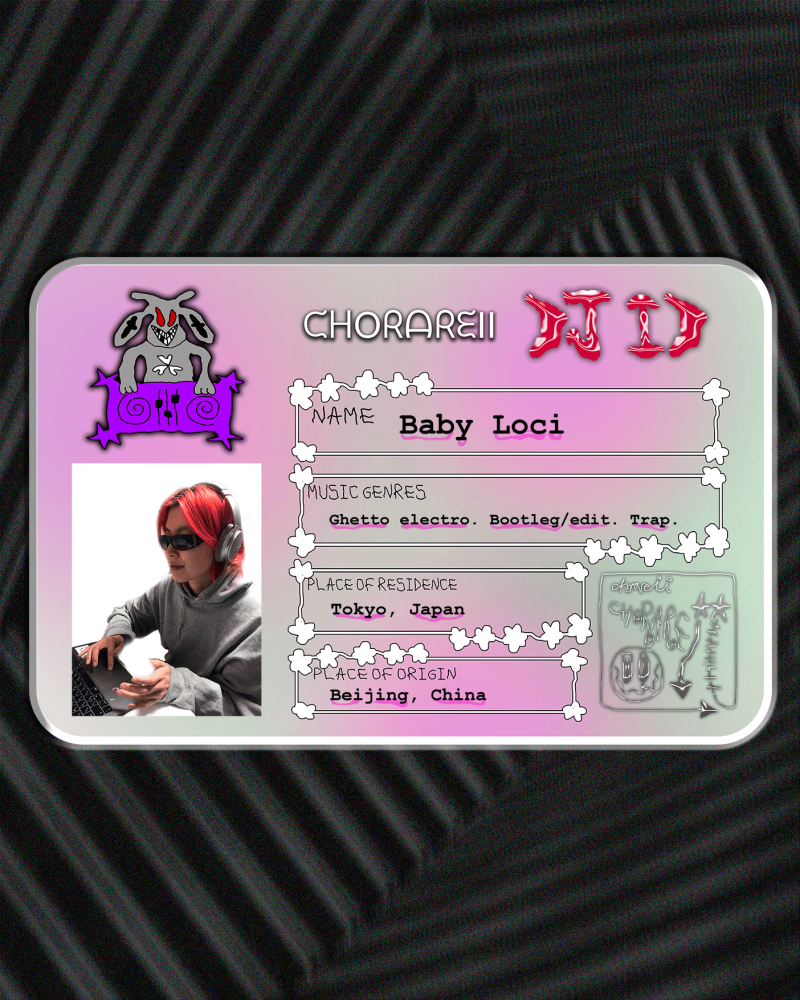 « I try to produce a narrative that’s fast-paced and easy to focus on for folks of short attention span just like me. » 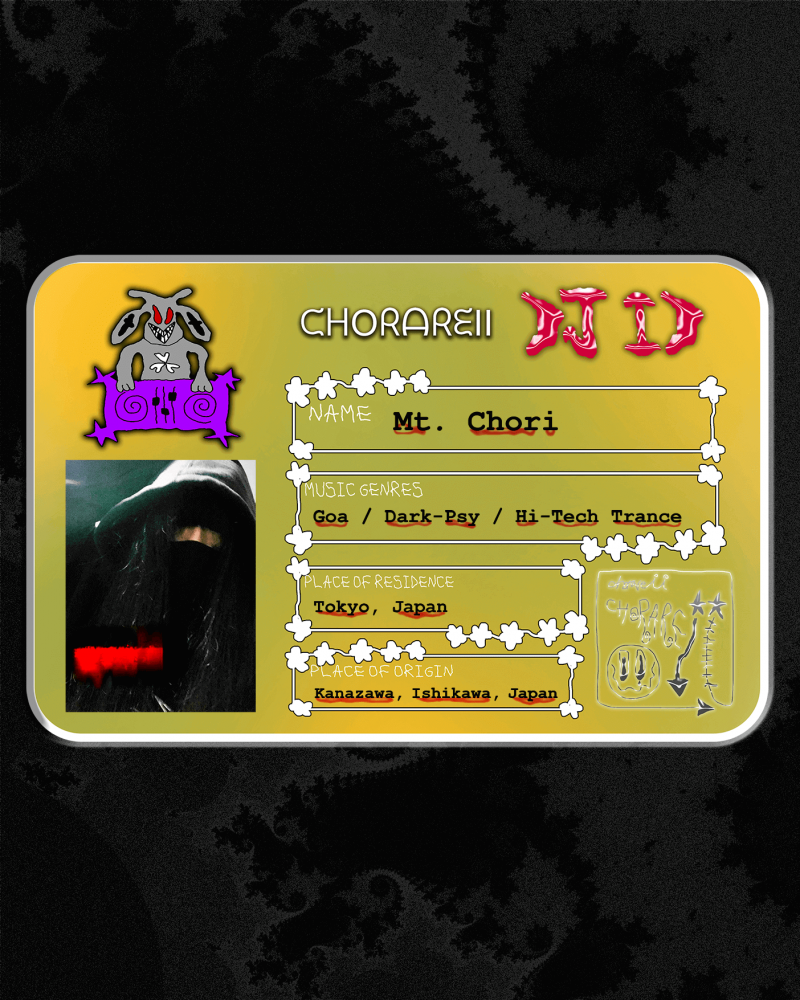 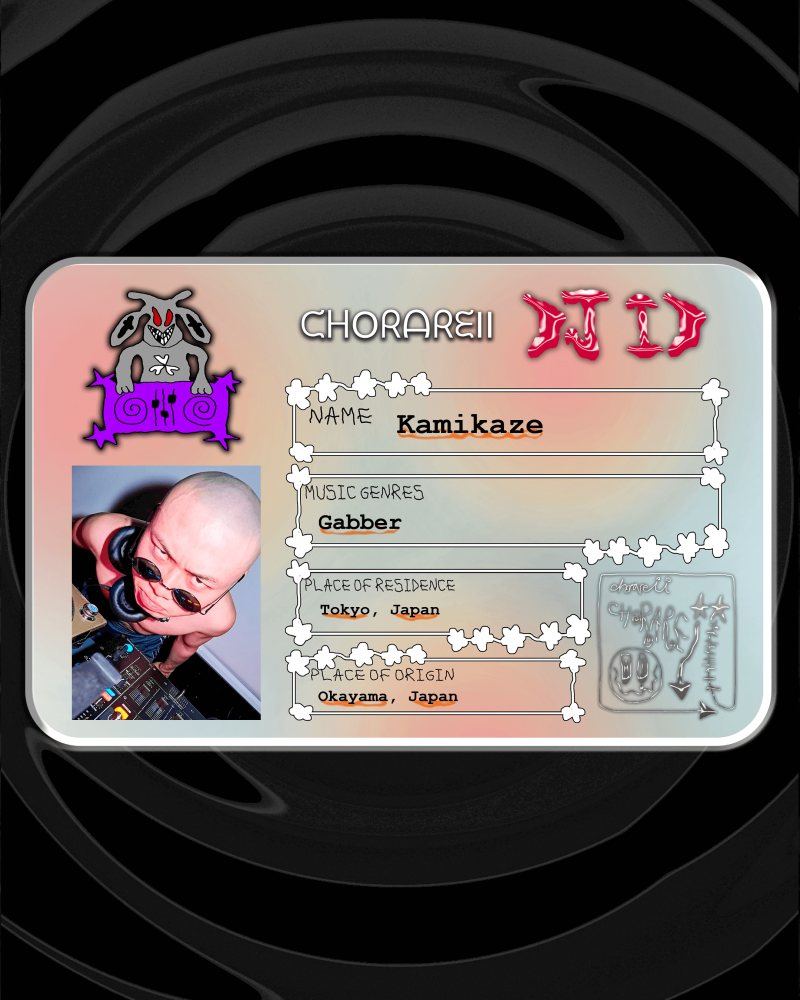 «Gabber as a music genre conveys a rebellious spirit, but gabbers share a unique love and behave as a family.» 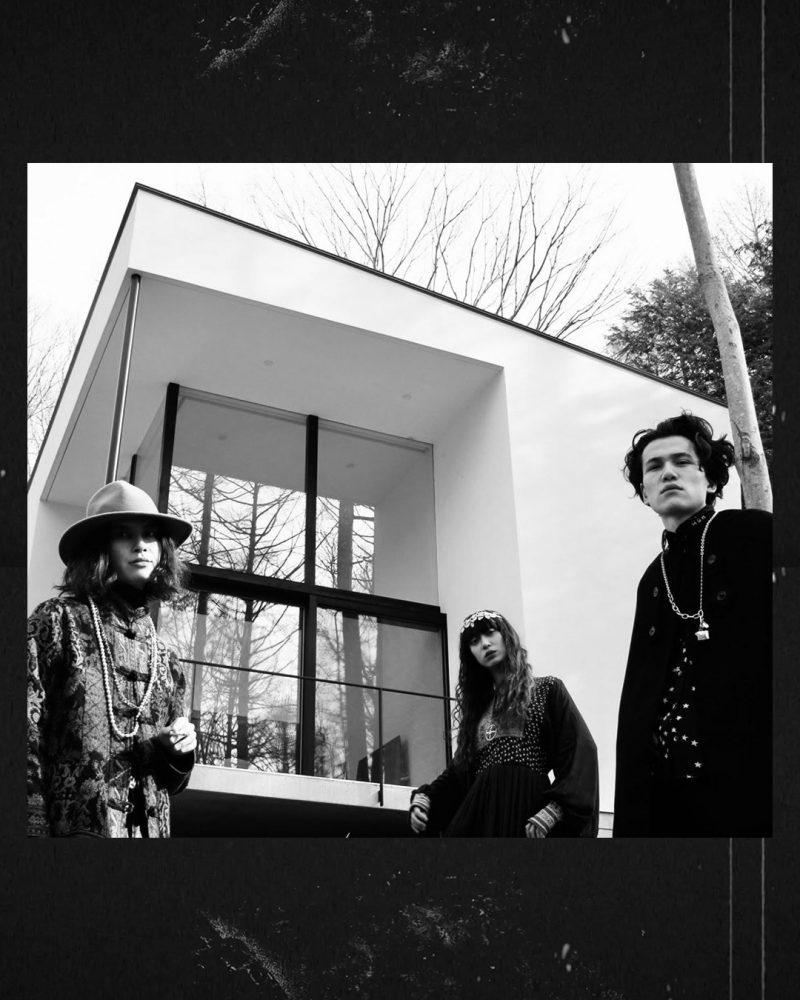